Tyler Zimmer reports on a ruling that denies overtime protection to millions of workers.

A TEXAS judge just denied more than 12 million workers a raise with the stroke of a pen.

U.S. District Judge Amos Mazzant issued an injunction to block a new rule from the Department of Labor that would have enabled millions of workers currently ineligible for overtime protections--for example, getting paid time-and-a-half when you work more than 40 hours in a single week--to become eligible.

Specifically, the Obama administration regulation would have reduced the so-called "white-collar exemption," which allows employers to avoid paying overtime for salaried administrative or professional workers who make more than about $23,660 a year--the equivalent of around $12 an hour for full-time work, and even less for workers pressured to work more than 40 hours a week.

The new rule would have basically doubled the threshold where companies can stop paying overtime--but that was too much for Judge Mazzant. Because of his ruling, millions of dollars in income that would have gone to workers will instead remain in the pockets of employers. 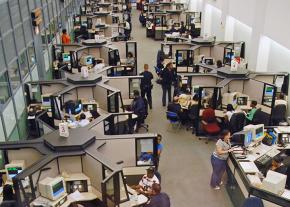 When the Fair Labor Standards Act (FLSA) was passed in 1938, overtime protections were intended to apply to all workers. Only managers and supervisors with the power to make schedules were supposed to be exempt.

Since the 1930s, however, a smaller and smaller percentage of workers have been covered by overtime protections. The rule change would have reversed that trend by expanding the number of workers eligible for overtime.

According to the Economic Policy Institute, millions of workers stood to benefit from the Obama administration's rule change, including:

6.4 million women, who represent half of all workers would directly benefit;

3.2 million workers with a high school degree, but not more education.

WHY DID Judge Mazzant issue the injunction and why is he so keen on denying raises to millions of workers? Ross Eisenbrey at the Economic Policy Institute has an excellent critical breakdown of the legal details. But this isn't at root a legal issue--it's a thoroughly political one that has to do with the balance of power between workers and employers.

An important starting point for understanding Mazzant's move is the election of Donald Trump. The injunction will be one of many challenges to existing protections for workers in the next four years. But there is more than contemporary politics at play.

Where did the FLSA come from in the first place? It is part of a web of bureaucratic machinery enacted during the New Deal era in the 1930s to regulate industrial conflict between workers and capitalists. All these laws were forged in the midst of the greatest working-class revolt in U.S. history so far.

In 1934, there were three general strikes--one in Minneapolis, one in Toledo and another in San Francisco. These were mass strikes involving hundreds of thousands of workers that shut down entire cities and sparked a huge wave of organizing activity all over the country.

These strikes resulted in a number of advances, including the successful unionization of the "Big Three" in auto manufacturing--a feat, like the unionization of Walmart today, that many at the time thought impossible. By the early 1940s, millions of workers had joined newly organized unions, more than doubling the size of the labor movement in the span of half a decade.

This working-class upsurge didn't go unnoticed by the ruling class, of course, but there were debates about how the wealthy and the state should respond to it.

Some sections of the capitalist class wanted to try to maintain a status quo in which unions were basically illegal. Others associated with the millionaire Democratic President Franklin D. Roosevelt were reluctantly pushed to the conclusion that a carrot-and-stick approach was needed to quell the revolt and preserve the existing order.

Roosevelt's approach carried the day. This is the background for the passage of various labor reforms, such as the overtime protections included in the FLSA, as well as Social Security, unemployment benefits, legal rights to collective bargaining and so on.

The positive aspects of these reforms were not given out for free--they were only won after hard-fought, militant struggles of millions of ordinary workers against their employers, the state and, in some cases, against their union leadership.

Fast forward to 2016. A billionaire who is staunchly anti-union is now set to control the executive branch of the federal government alongside a hoard of anti-union Republicans who will control Congress.

Mazzant's attack on overtime is likely to be a mere opening salvo in a battle involving more brutal and ambitious attacks on workers, such as a national right-to-work law, the overturning of the Friedrichs decision affirming public employees' right to collective bargaining, more legal restrictions on the right to strike, and on and on.

What right-wing Gov. Scott Walker did to labor in Wisconsin, Congressional Republicans and Trump may seek to do to workers all over the nation.

HOW SHOULD workers respond? The history of the 1930s presents some answers: Militant action in their workplaces, organizing the unorganized, and building the kind of broad-based unity and organizational strength in the labor movement that neither capitalists nor politicians can afford to ignore.

This was what won the meager labor protections we have in the first place. The strides that labor made in the public sector during the 1960s and '70s were also won through militant, ambitious organizing efforts--many of them inspired and buoyed by social movements of the era, above all the Black freedom struggle.

These lessons from history are at odds with the common sense of contemporary liberals, however. For them, the reforms of the 1930s and 1960s were won by electing reform-minded Democrats with the foresight and resolve to do what was right.

In contemporary terms, this approach translates into a strategy that emphasizes looking ahead to the 2018 and 2020 elections with an eye to "take back" the White House and the Congress by campaigning for Democratic candidates.

Far from being a realistic solution, however, this failed approach is a prime cause of our present malaise. For decades, most of the labor movement has done little more than manage its own decline. It has brokered concessionary deals with employers and partnered with Democratic politicians in the hopes that the worst outcomes could be avoided through patient negotiation and cautious conservatism.

You can only effectively negotiate from a position of strength. So long as strikes remain at historic lows and union density continues to drop year after year, the power of workers to stop attacks, like the injunction against expanding overtime protection, will continue to decline as well. To the extent that the union movement allows itself to be divided, all unions will be vulnerable to being conquered by Trump and employers.

A renewed, militant labor movement based on class solidarity and rank-and-file democracy is the only way to turn the tide and stop the coming barrage of attacks from Trump and his ilk.

Trump is actually vulnerable on a number of fronts--the most obvious being that he has no mandate for his reactionary agenda. He lost the popular vote in the presidential election by a margin of more than 2.6 million votes and "won" the election by garnering the support of little more than 25 percent of the eligible electorate.

Trump is the most widely disliked president-elect ever since statistics were kept. The labor movement and the left should exploit this weakness to the fullest extent possible in order to thwart his anti-worker agenda.

That is a task best accomplished through independent political action, protest and, most importantly, a wave of new organizing that leverages the widespread anti-Trump mood in the country to build a bigger labor movement and a bigger left.