Why are police the priority in Rahm’s Chicago?

"OF COURSE we are going to find the money."

That was the response of Chicago Mayor Rahm Emanuel last month, when asked how he was going to find the money to pay for the 970 additional police officers that his administration had pledged to hire over the next two years in response to an increase in violent crime in the city.

For months, Emanuel and other city officials had insisted that there was no money to cover contributions to the pensions of Chicago teachers or to fully fund public schools. The city was broke, they claimed. That lie was exposed when the city came up with a last-minute contract offer for teachers that included tens of millions of dollars taken from Emanuel's "tax increment financing" surplus.

But the money for the still-to-be-ratified teachers' contract had to be pried out of Emanuel. When it comes to funding more cops, the mayor doesn't hesitate.

And it's a lot of money, too. According to the Chicago Sun-Times, "At a first-year cost of $138,000-per-officer including salary, benefits and supervision, the 970 additional officers carry a two-year price tag of $133.8 million." 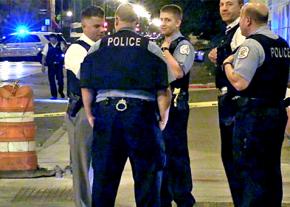 There couldn't be a starker illustration of priorities for city leaders. As they strangle public services and ignore the real roots of the violence plaguing Chicago, their only solution is to expand a police force that is notoriously brutal, racist and corrupt.

INFLUENCED BY the city's propaganda, many people accept the need to hire more cops as common sense.

As of October 18, there have been 596 murders in the city this year. That's a marked increase over 492 homicides in all of 2015--which was itself an increase over 2014. According to the Chicago Tribune, as of October 17, 3,475 people had been shot in the city, compared with 2,441 people shot this time last year. August was the deadliest month in the city since 1993--with 90 homicides and more than 400 shootings.

To date, Chicago has had more homicides this year than New York, which is three times larger, and Los Angeles combined.

But the violence doesn't impact every Chicagoan equally. The vast majority of the victims live in Black and Latino neighborhoods on the city's South and West Sides.

While it's easy to get lost in the numbers, each statistic represents the suffering of families and communities being ripped apart--like the unnamed woman who a Chicago Tribune reporter saw sobbing at the entrance to the emergency room of Mount Sinai Hospital on October 14 following a shooting with multiple victims in the West Side neighborhood of East Garfield Park. The woman held a young boy and sobbed, "Please don't do this to us," before collapsing to the ground in grief.

On the campaign trail, Donald Trump has been quick to point to Chicago's murder rate as evidence of "inner cities" that are "horrible, horrible death traps."

But on the other side of the mainstream partisan divide, there is a different racist reaction: the failure of the Democratic political establishment that runs the city--from Emanuel to the overwhelmingly Democratic City Council--to talk about the causes of violence or offer solutions that do anything more than paint a target on communities already suffering under the yoke of poverty and police brutality.

WHEN EMANUEL announced last month that his solution to the rising murder rate would be to fund nearly 1,000 more cops over the rate of attrition over the next two years, it raised eyebrows coming amid deadlocked negotiations with the teachers--and, in fact, the layoff of 1,000 teachers and staff shortly before the school year started.

But even more importantly, the money for more police does nothing to address the social factors contributing to the violence.

These include inflated rates of poverty and unemployment, especially among the city's African American population; the disruption caused by the closure of more than 50 public schools by the mayor, which inflamed tensions between different gangs; the ongoing attack on social services, like Emanuel's closure of half of the city's mental health clinics, which mainly served high-crime, low-income Black and Hispanic communities; and increasing gentrification that causes families to be uprooted from their neighborhoods.

It's worth questioning Emanuel's logic that says spending well over $100 million on more cops would do more to quell violence than, say, putting that money toward providing jobs, housing and better schools in the neighborhoods most prone to violence.

In general, say experts, increasing the size of a police force doesn't necessarily lead to a decrease in violent crime. If that were true, then Chicago--which at around 12,500 officers already has the second-largest police force in the country--would already have lower crime rates.

On the other hand, hiring more police automatically means there are more officers who can abuse their powers on a force already notorious for its brutality.

There is a bitter irony to the fact that Emanuel wants to spend tens of millions more on extra cops--since the city has, between 2004 and early 2016, paid out more than $642 million in settlements to the victims of police brutality and their families.

Meanwhile, as social services will inevitably be cut further to pay for additional police, an investigation by the Chicago Reader recently found that since 2009, Chicago police have seized nearly $72 million in cash and assets through a process known as "civil forfeiture"--seizing the assets, like cars, of people either accused of a crime or, often, tangentially related to the commission of an alleged crime.

Not surprisingly, the civil forfeitures have hit poor and working-class residents--especially Black and Latino residents--the hardest, because they lack the resources to challenge the police in court to reclaim property and cash.

Chicago cops have always had a reputation for corruption and brutality, but lately, every day seems to bring new revelations of wrongdoing. In a recent four-part investigative report for the Intercept, for example, reporter Jamie Kalven documents the claims of two officers who were told by department higher-ups to ignore evidence of a fellow officer's extortion of drug dealers.

Or there is the story that New York Daily News journalist Shaun King reported earlier this month: A Chicago cop who sodomized a suspect with a screwdriver during a strip search in 2004, along with his partner who stood by as it happened, are both still on the force, each making approximately $90,000 a year.

AFTER EMANUEL'S announcement, Police Superintendent Eddie Johnson--who was appointed to the job after the public outcry over the police execution of Laquan McDonald forced Emanuel to fire former Superintendent Garry McCarthy last year--told reporters recently, "This will make us a bigger department, a better department and a more effective department."

But "better" and "more effective" at what?

A thousand more cops on Chicago's streets is a slap in the face to the families of Laquan McDonald, Rekia Boyd, Paul O'Neal or any of the many other victims of Chicago police.

McDonald's family had to fight for more than a year for the release of police video that showed the teen being ruthlessly murdered by police.

Boyd's killer, officer Dante Servin, will never serve a day in jail after a judge earlier this year cleared him of the involuntary manslaughter charge against him--on the twisted reasoning that he should have been charged with murder, so it was better to dismiss the case against him.

And partial video finally released after the killing of O'Neal--"partial" because the officer who fired the fatal shot hadn't turned his body camera on--show cops pushing the wounded teen's head into the ground and calling him a "bitch ass motherfucker." Later, they can be seen high-fiving each other and celebrating that "We got one over here."

For these families, the promise of a thousand more cops feels more like a threat than a comfort. That's especially true given Johnson's own outlandish statement earlier this year that, in 27 years on the job as a Chicago cop, he's "never encountered police misconduct."

To pretend that more police on the streets will translate into more peaceful communities ignores these victims--and the reality that the role of police is primarily to protect private property and serve the interests of the state, not to safeguard our rights.

As Pastor Marshall Hatch, whose congregation is in the West Garfield Park neighborhood, recently told NPR, the hiring of more police won't stop the systemic problems that fuel the violence. "[E]verybody knows you can't police yourself out of a problem like this when the real problem is poverty, despair and disinvestment," he said.