In what kind of political bizarro world could a billionaire real estate tycoon be considered a class warrior for the "little guy," wonders Elizabeth Schulte?

WHEN DONALD Trump made the announcement that he was running for president in June, he arrived at the podium set up for him in New York City's Trump Tower by escalator.

The down escalator, of course. Because when you're Donald Trump, everything is down from where you are, even the office of president of the United States.

Trump is an arrogant real-estate billionaire who puts his name in big letters on his buildings--as if someone might forget that it's his--and trades insults as easily as he transforms working-class housing into playgrounds for the rich. His campaign for the Republican presidential nomination hasn't left the headlines since it began, and his first-place ranking among all the other candidates has many political analysts scratching their heads and asking: What exactly is the attraction?

With an arrogant, in-your-face style, Trump claims he wants to put ordinary people first, but his message is a toxic brew of populist rhetoric about fighting for the "little guy," mixed with nationalistic attacks on China, immigrant-bashing and insults directed at Muslims and women. 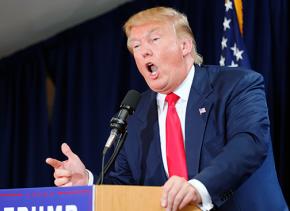 If you go to Donald Trump's Make America Great Again! website to find out what he stands for, there are just two entries in his "Positions" section--four months into his campaign. The first position is about protecting the Second Amendment--it declares that "empower[ing] law-abiding gun owners to defend themselves" is an "important way to fight crime."

The second "position paper" concerns "immigration reform," including plans for building a 2,000-mile wall between Mexico and the U.S., and making Mexico pay for it; calls for greater law enforcement powers for police to apprehend "criminals who cross our border"; and an end to "birthright citizenship," under which the children of immigrants born in the U.S. are citizens.

Guns and immigrant-bashing--it's not too hard to figure out who Trump is talking to.

WHILE MANY of Trump's actual policy stances are hazy, his racism isn't--and as he has made clear over the last few months, Trump isn't concerned about the ramifications.

In August, two racists in Boston beat up a homeless Latino man, telling police afterward that "Donald Trump was right, all of these illegals need to be deported."

In September, a supporter wearing a "Trump" T-shirt at a campaign event in Rochester, New Hampshire, told Trump: "We have a problem in this country. It's called Muslims. You know our current president is one. You know he's not even an American." The man continued, "[W]e have training camps growing where they want to kill us. That's my question: When can we get rid of them?"

Trump answered: "We're going to be looking at a lot of different things."

The mainstream media pointed out that Trump hadn't corrected the audience member and explained that, no, in fact, Barack Obama is not a Muslim. No surprise there: Trump has, on several occasions in the past, questioned Obama's citizenship, demanding that the president produce his birth certificate.

But there was less attention paid to the other part of the Trump supporter's statement--that he could talk about "getting rid" of Muslims in the U.S., and no one, the candidate included, disagreed with him.

You might be tempted to write this off as outlandish ravings, but Trump isn't alone in his beliefs. For example, some 54 percent of likely Republican voters also believed Obama is a Muslim, according a recent Public Policy Policing poll.

Trump amplifies and legitimizes this ignorance and bigotry, similar to how right-wing news sources like Fox News do--sometimes in a more polished form and sometimes not.

THE REASON he gets a mass hearing is his campaign is speaking to a section of the U.S. population that is frustrated with the economic crisis and how little mainstream politics has to offer them. Trump puts across a twisted version of an argument against the Washington status quo, including the Republican Party role in it. His success underscores the real difficulties of the GOP establishment in motivating their voting base.

Only in the warped world of American politics could a real-estate billionaire who owes a significant part of his fortune to preying on working-class renters pretend to be representing working people against the establishment. In reality, Trump has nothing to offer working-class voters except xenophobic and bigoted rants that target easy scapegoats among foreigners and minorities--among, that is, persecuted sections of the working class.

Some in the media understand who Trump is aiming to reach with his right-wing populism. But they accept at face value the idea that he is speaking for the interests of a section--white and conservative--of the working class.

That isn't true on its face, as Nina Burleigh of Newsweek made clear by focusing on an exchange at the first debate of Republican presidential hopefuls last month about Trump's record of serial bankruptcies in Atlantic City, New Jersey. As Burleigh wrote, it was a:

singularly nauseating spectacle of a billionaire with an American flag in his lapel pin boasting that he used the bankruptcy laws to pull his business out of a dying American city before he went down with it, without offering either a word of condolence to the people left behind or a single idea about how to put it back on its feet...

When Chris Wallace asked him about the four bankruptcies, Trump was prepared with his stock answer. He was "just taking advantage of the laws" to build and maintain his empire...[W]hat Trump did was to share one of the myriad little ways the 1 Percent, like him, game the same system. A Trump bankruptcy doesn't save him from sleeping in his car, it enables him to get even richer while leaving creditors (albeit "killers," he noted, perhaps to differentiate his lenders from the nice mega-banks that bleed most debtors dry) counting losses to the tune of a billion dollars.

IRONICALLY, BOTH parties face a similar problem: How to get voters tired of the status quo to support candidates like Jeb Bush and Hillary Clinton, both from wealthy and well-connected political dynasties and the very definition of the Washington establishment, however much they protest it.

The campaign of Bernie Sanders, a self-described socialist who is taking up issues of economic and social justice, is getting an enthusiastic response on the Democratic side. Sadly--and tellingly--Sanders has already ruled out an independent challenge against the party's eventual nominee, still likely to be Clinton. But within the Democratic primaries, he is certainly a departure from the usual election-year fare.

But where Sanders offers a whiff of hope in the rotting presidential nomination process, Trump is the stink of despair.

Trump is actually considered liberal on some issues, such as abortion rights and Social Security, which he has supported--at least in comparison to the reactionary consensus of the party whose presidential nomination he is seeking.

But by and large, his beliefs are a crazy quilt of anti-government and pro-business policies, including destroying labor unions, cutting spending on public education and increasing oil drilling--since, remember, Trump thinks that climate change is a hoax invented by the Chinese "to make U.S. manufacturing non-competitive."

Another reason his most fanatical and crackpot ideas get a hearing is that the mainstream media amplify each one of Trump's ugly utterances.

That's another stark contrast to Sanders. The two are getting around the same percentage of support in national opinion polls for their respective races, but a Fairness and Accuracy in Reporting analysis of coverage of the two candidates found that the major TV networks accessible to most people, ABC, CBS and NBC, named Sanders in their news stories once for every six mentions of Trump. The leading newspapers, the New York Times, Washington Post, Wall Street Journal, Los Angeles Times and USA Today, ran three times as many Trump stories as Sanders stories.

WITH A wide-open field of contenders for the Republican nomination, it's been easy for Trump to hog the attention and stay on top. And he could well hang around for some time to come. After all, arch-conservative Pat Buchanan won the New Hampshire Republican presidential primary in 1996, and Religious Right poster boy Mike Huckabee triumphed in the Iowa caucus in 2008, before both went down in flames.

But at the end of the day, history teaches us that the mainstream party's nomination process is still dominated by the corporate and wealthy interests who control the money. The smart money has to be on an outcome similar to the 2012 GOP primaries, when there seemed to be a new Republican renegade topping the polls every few weeks--but in the end, the party got the establishment choice from the outset, Mitt Romney.

Trump knows full well that this is how U.S. politics really works. As a businessman, he's contributed to many political campaigns, including prominent Democrats like Nancy Pelosi, Harry Reid, Charles Schumer and, yes, Hillary Clinton. He didn't do it because he supported their policies, like voters are expected to do, but because that's the way the 1 Percent buy influence.

"I give to everybody," Trump explained at the first Republican debate in Cleveland. "When they call, I give. And do you know what? When I need something from them two years later, three years later, I call them, they are there for me."

That's the two-party system summed up neatly. As Lance Selfa explained in a Socialist Worker feature, the Democrats and Republicans:

exist at the delta of all of these multiple tributaries of corporate and individual--typically derived from corporate--wealth. They still perform the function of officially nominating candidates, providing the label under which they run, and an easy identification for voters to use when they choose. But before they get the party stamp of approval, candidates have already won the "money primary," signifying that Corporate America has signed off on them.

In the meantime, however, Trump's message of racism, sexism and Islamophobia will get a wider hearing than he already had. The Republican establishment has let his bigotry flourish, and the Democrats have opposed it only insofar as it shows how scary their Republican opponents are.

It is up to the left to counter Trump's message of desperation and hate with an alternative political vision--and make the arguments that neither party, Republicans nor Democrats, is willing to.